Here is a high quality lovingly created jpg sent to me by Ant listing the tour dates we have coming up in 2014, lots of new music in difficult time signatures, can’t wait! 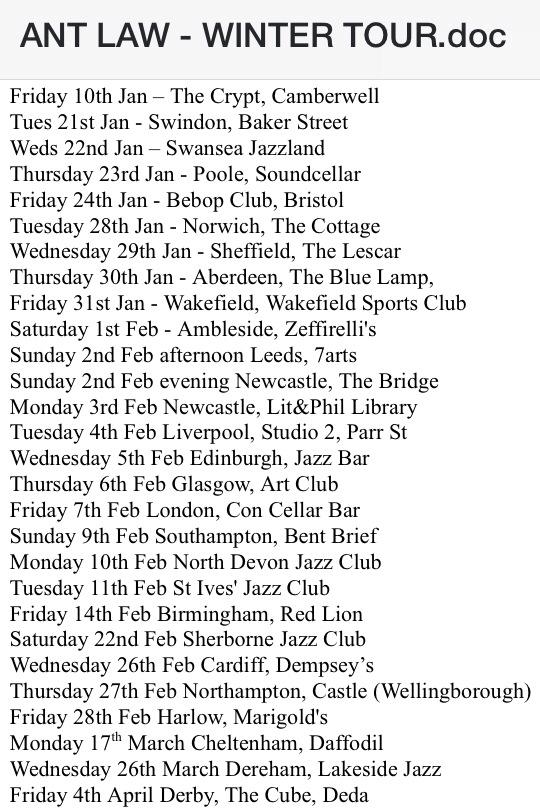 Thanks to everyone who came to the Con last week, it was a great night and I was really glad to finally give the music I’ve been working on an airing. There will be a little run of gigs (hopefully) in April/May starting with The Oxford, Kentish Town on the 15th of April, playing the same music (after some extensive rehearsal!) and some more new music. So watch this space for more dates and info. I am also thinking of possibly recording one of those gigs for a little online release, currently weighing up the options.

The very exciting and epic 27 date (so far!) Ant Law Quartet Nationwide Tour 2013 has begun, and the album (Entanglement – Ant Law with Tom Farmer, James Maddren and John Turville on some tracks – available here) has been pressed, is for sale currently from Ant on gigs and through his website and will be on full release imminently. The album sounds great and I urge you to check out a gig. If you’re in London then get down to the Jazz Nursery this Thursday the 7th of February, or to the big album launch gig at Pizza Express in Soho on the 11th of March. For numerous other dates outside of London check out the upcoming gigs page.